The first warping of our language was the expression "Ground Zero". I grew up with this term applying only to the point closest to a nuclear blast. It was associated it with Cold War, World War Three, Armageddon. But to hear it commonly used to describe the ruins of the World Trade Center compounded all those old fears to an already terribly tragic event. 9/11 was horrendous but it wasn’t the ultimate horrendous act; the dropping of a nuclear bomb. This was the first of a number of exaggerations and euphemisms which would fan a dangerous nationalism and ultimately define us as an Empire.

After Ground Zero came “regime change” and “pre-emptive strikes”. Was I nuts for feeling shocked with the unabashed and nonchalant manner with which my government, the media and friends started to discuss the invasion of other countries and the overthrow of other governments? During the Cold War, these kinds of matters were treated as top secret; matters that the CIA engaged in. But now, opposition forces, leftists and conspiracy theorists no longer have to speculate about American sponsorship of military coups through CIA "covert activity" (remember that term?). Because of 9/11 the USA now openly calls it "regime change" and even gives dates for its attacks. In fact, when you think about it, the USA's rhetoric for foreign policy is probably at it's most honest ever.

Then came the broadening of the definition of the word “hero”. Everyone who died in the attacks was automatically a hero. Our service men and women were all heroes now. Television news adores calling every member of the military a hero. I recall a Good Morning America anchorman introducing a soldier, as a guest on his program, as a "bona fide hero". No purple heart, no extraordinary accomplishments. Just for serving he was now a hero... Will there one day be a term to describe those who don't serve?

Then the most troubling expression to join the post-9/11 lexicon is “enhanced methods of interrogation”. Do I even need to go there? I grew up with the Soviet Union being called the Evil Empire by Ronald Reagan. But with Abu Grahib our government along with our new bizarre and careless use language in our media (for the whole world to see) managed to undo the world wide solidarity we enjoyed right after the attacks.

If anything, 9/11 consolidated us as an empire. The arrogance with which our government, our media and we ourselves casually discussed torture, the assassination of world leaders and pre-emptive strikes over the past 10 years, no longer makes us imperialistic... An adjective. 9/11 made us a noun. We ARE empire. Our behavior is no longer imperalistic. It’s imperial. We are not declining... We have only just begun.
Postado por Ricky Seabra às 06:29 Nenhum comentário:

...always melancholic this time of year... 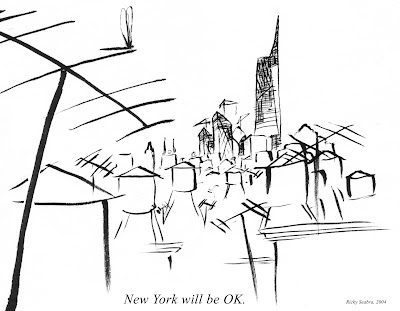